Hovells Creek starts at the base of the Three Sisters, near Anakie. The Three Sisters are a series of three scoria cones, which emerged from the volcano of Mount Anakie between 1.2 and 1.4 million years ago.

The creek then flows through a landscape covered with fresh limestone and past the You Yangs. It is a slow-moving watercourse that is filled when rain falls in the northwest of the catchment and opens at Limeburner’s Lagoon, adjoining Corio Bay.

In the 1960’s, Ian McClean Turner developed the estate, known as Wingara Drive. He planted the first trees along Hovells Creek. 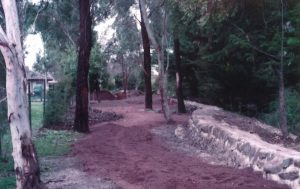 During the 1970’s, the Hoffman family moved into Wingara Drive. They began looking after the trees that Ian McClean Turner had planted and soon began landscaping the banks along the east side of Hovells Creek. This was achieved by lugging buckets of water up from the creek. In the beginning is was simple, the Hoffman’s just cleaned up the rubbish and boxthorn along the creek.

In 1973 a significant flood caused much damage to the banks of the creek, when 190mm of rain fell over a period of 20 hours. Water flooded 15 homes in the Flinders Avenue and Wingara Drive area. Following the 1973 floods, a levee was constructed and completed in 1986.

In 1976, the then Shire of Corio sealed the road (Wingara Drive) and put in a water main to allow for further planting.

Over the years everything was bought in, the soil, rocks, tree stumps, pots and, of course, the plants. Everything was built as well, the steps, seats and the earth sculpture at the end of Walkers Road. When Kevin wasn’t working at his day job, he was working on the walk.

In 1982, Wingara Drive was awarded an outstanding streetscape award by then Victorian Premier, John Cain. In the same year young Wingara Drive resident, David Martin, a student landscape architect at the University of Canberra, won an international design award for his “Landscape Masterplan” of an area which encompassed the Kevin Hoffman Walk, as well as the open space and wetlands opposite known as ‘The Duck Ponds’.

In 1983, the Shire of Corio made a commitment to implement David’s award winning “Landscape Masterplan” as part of its flood prevention programme to protect central Lara. This led to an early phase of revegetation works in 1984 & 1985 along the creek corridor. They used locally grown River Red gums (Eucalyptus camaldulensis) as well as other indigenous plants along the creek edges, which have now been integrated with the Kevin Hoffman Walk. 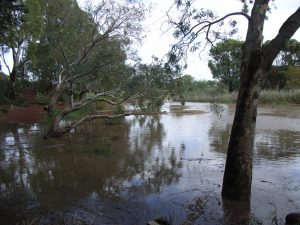 millimetres of rain fell in just five hours on already wet ground in the area causing the levee bank at the rear of Ponds Drive to overtop.

78 properties flooded, with 60 flooded inside the building. Station Lake Road Bridge, Flinders Avenue and Rennie Street were flooded, impacting access in and out of Lara.

After these floods the levee bank needed to be repaired and approximately 60 centimeters was added to the height in some areas. Hovells Creek has a history of flooding, usually occurring between November and February.  Significant flooding in the area has occurred in 1933, 1973, 1978, 1983, 1988 and 2011.

In 2011 the Friends of Kevin Hoffman Walk Inc. were formed to assist Kevin with the maintenance work of this significant native parklands that he and his family created for the Lara region.

In 2017, as a nod to the traditional owners of the land, seven Wathaurong Glass inlaid bollards were created and installed near the Walkers Road entrance. 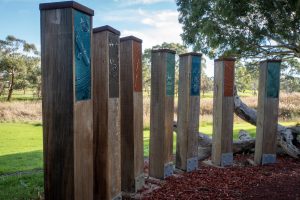 The symbols on each of the bollards represents a traditional Wathaurong spirit or entity.

The first bollard on the right, is Bunjil the Wedge tail eagle. Bunjil is the creator of life to the Kulin Nation of which the Wathaurong is a part. The second bollard symbolises people. The horse shoe shapes represent people, in this story, walking along the path of Kevin Hoffman Walk. The third bollard is Lelon the Lizard. During your walk, in certain seasons, you will see Lelon. The fourth bollard is Goeem the Kangaroo. The fifth bollard is Barribin the Turtle. The second last bollard shows the You Yangs above and Corio Bay below. The last bollard represents Gerrang, a gum leaf. A gum leaf is given to those who want to pass through the traditional owner’s land. 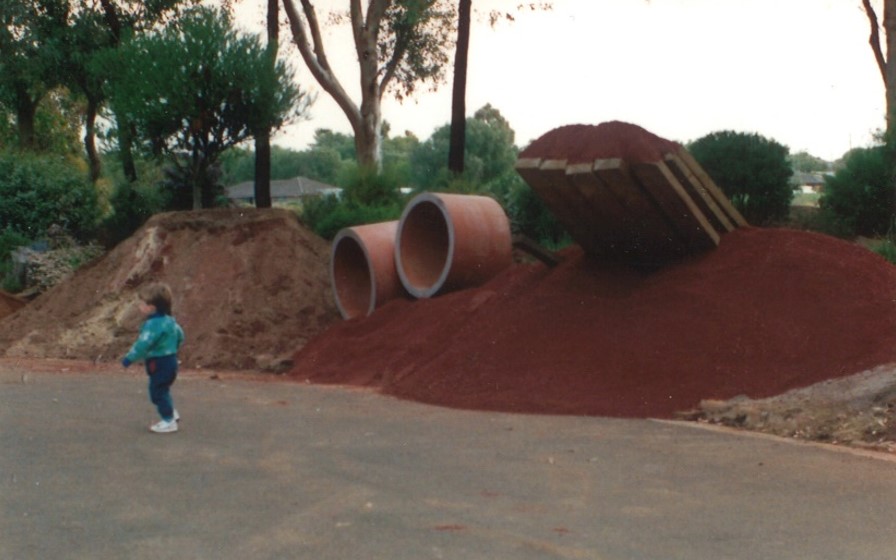 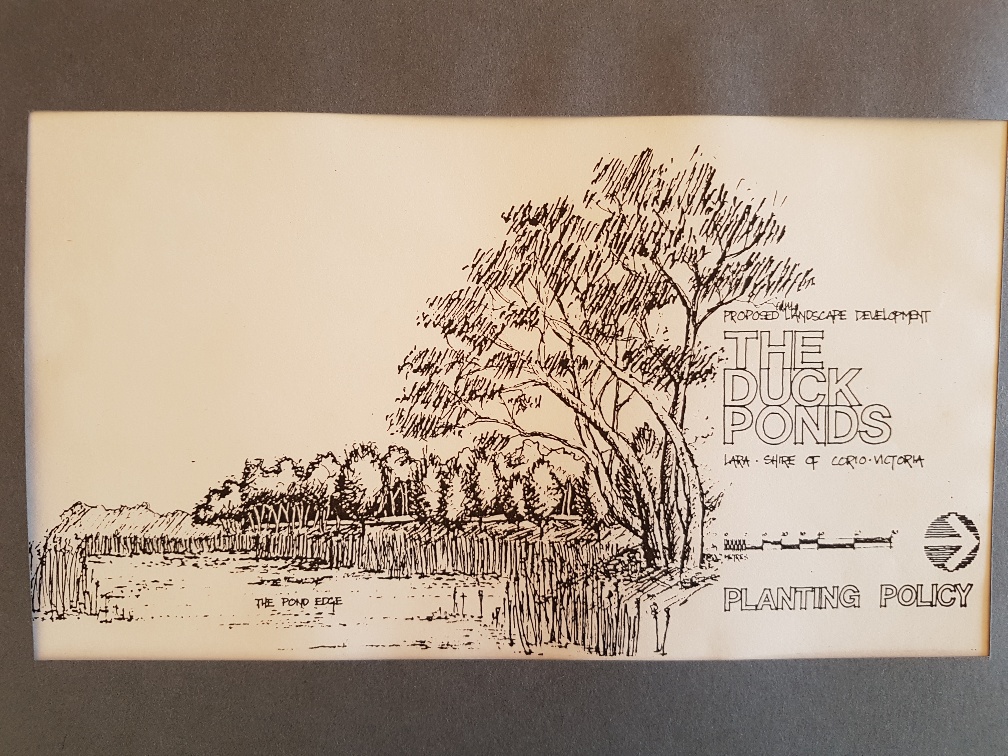 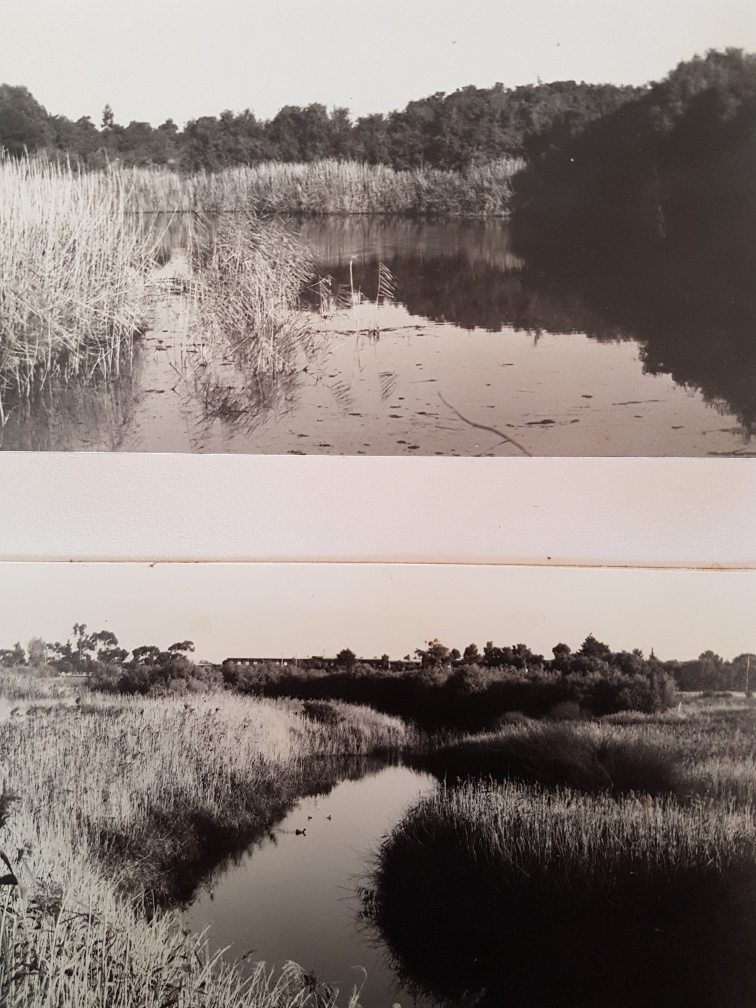